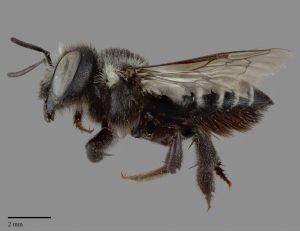 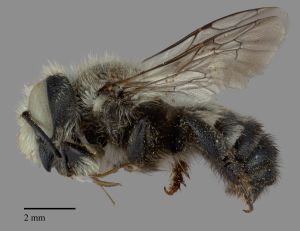 The female of M. subnigra is distinct, being the only species of Megachile in Canada with an entirely black scopa. The male of M. subnigra is also distinct, recognized by the combination of conspicuously pale coloured and greatly modified front legs, a rounded postmedian tranverse carina on T6, the mesepisternum without a protuberance, T5 with a white apical fascia, hind tarsomeres that are broad apically, and legs that are mostly black pubescent. These characteristics also separate the melanistic form (often considered the subspecies M. subnigra angelica Mitchell) that occurs in Canada from the pale form which presumably does not. However, as indicated by Sheffield et al. (2011), sevaral species of the subgenus Megachiloides occur in melanistic forms, so here we do not recognize subspecies.

The DNA Barcode Index Number (BIN) for this species is BOLD:AAD7209.