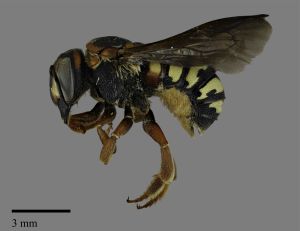 Timberlake (1943: 77) commented on the type locality for Megachile interrupta, suggesting the possibility that the specimens were collected further west (as Missouri gained statehood in 1821), indicating that modern records were known only as far east as western parts of Kansas and Nebraska.

The DNA Barcode Index Number (BIN) for this species is BOLD:AAD4457. No differences have yet been recorded among the subspecies, nor the eastern species D. simile (Cresson) and D. floridiense Schwarz. The the latter, this observation supports Timberlake (1943) who felt that D. floridiense was only a colour variant of this species; Grigarick and Stange (1968) considered it a subspecies of D. curvatum. Mitchell (1962: 16), Krombein (1967), and Hurd (1979: 1994) considered it a valid species based on no evident intergradation, larger size, and the more conspicuous second mandibular tooth of the male. Further support for D. floridiense being a distinct species comes from its nesting biology, as Krombein (1967) recorded it nesting in pre-eixisting cavities, differing from the unique nesting habits recorded for D. curvatum described below. Presumably, the nesting habit of D. simile aslo differs from D. curvatum.

Grigarick and Stange (1968) indicate that this is the likely the most studied Dianthidium in North America due to its habit of nesting in aggregations in soil, increasing the likelihood of finging nests; it is the only Dianthidium to nest in soil (Custer and Hicks 1927). Hicks (1926b) recorded as many as 250 nesting cells in a radius of 90 cm, all at a depth between 5-10 cm below the surface, and often attached to plant roots. Nest entrances were communal (Hicks 1926). Like other Dianthidium, nest cells are constructed with small pebbles or sand held together with plant resins (Grigarick and Stange 1968). A number of mutillids, a sapygid, and bombliid fly parasitize nests of this species (Hick 1926a; Custer 1928; Fischer 1951; Grigarick and Stange 1968)

Grigarick AA, Stange LA (1968) The pollen-collecting bees of the Anthidiini of California (Hymenoptera: Megachilidae). Bulletin of the California Insect Survey 9: 1-113.

Hicks CH (1926a) Nesting habits and parasites of certain bees of Boulder Co., Colorado. University of Colorado Studies, Series A 15: 217-252.