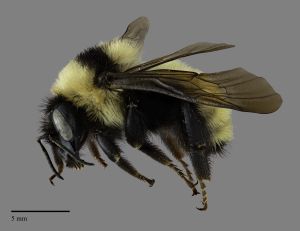 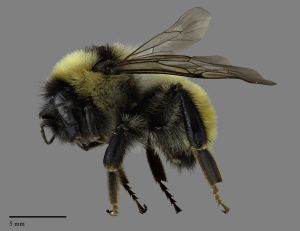 Much historic and recent (Williams et al. 2014; Koch et al. 2018) taxonomic debate has been focussed on this species due to the highly variable colour patterns, especially in the western part of its range. Though very little variation in COI exists across the range of this species (), much variation in colour pattern does. Recently, Koch et al. (2018) examined variation in both colour and molecular data and found two distinct monophyletic groups within the B. fervidus species complex. As a result, they rejected the hypothesis that this complex is composed of a single species, but could not reject the hypothesis that B. fervidus and B. californicus were conspecific, because the type specimens of both could be included in a single lineage. Unfortunately most of the material studied by Koch et al. (2018) was from the United States. Although they only looked at differences in colour and genes, they did not explore any ecological patterns that might support partitioning the complex. Hobbs (1966) studied the nesting ecology of both B. californicus and B. fervidus in Alberta, Canada, and in addition to observing differences in nest site preferences (i.e., B. californicus in surface level-hives, B. fervidus in below-surface hives), and habitat use (i.e., B. californicus nesting in wooded areas, B. fervidus in the open prairie). However, these may be localized behaviours, as B. fervidus s. str. certainly nests above ground and in wooded areas in other parts of its range in Canada.

Bombus neglectulus Ashmead is atypical for this species, both in terms of colour pattern and distribution. Ashmead (1902) indicated that the type locality was from Alaska (Poroma is listed in the USNM database, though it is possible that this could be a mispelling of Poorman, AK). However, as no other records of B. fervidus s. l. have been recorded from Alaska or northern Canada, it might be possible that this species was mislabelled and/or that metadata was incorrectly recorded; though no date was provided by Ashmead (1902; though presumably the Harriman Alaska Expedition occurred in 1899), the USNM database indicates 10.3.48 [presumably 3 October 1848], though the date of the Alaska expedition was 1899 (Ashmead 1902). It is likely that Ashmead\\\'s concept of species was based mostly on colour pattern, as in the notes accompanying this species, he indicated that it was very similar to  Bombus howardii Cresson, a synonymy of Bombus occidentalis Greene (subgenus Bombus s. str.). However, the type specimen of B. neglectus has the long malar space typical of B. fervidus s. l., though with more pale hair above the antennal bases. Ashmead also recorded B. californcus from Alaska (Sitka), but incorrectly synonymized several species under B. californicus Smith, including B. vosnesnskii Radoszkowski (including B. columbicus Dalla Torre), and B. flavifrons Smith. Interestingly, B. flavifrons is the only one of these species known to occur in Alaska.

Hobbs (1966) did extensive studies of the nesting biology of this species in artificial domiciles in Alberta Canada.

Ashmead WH (1902b) Papers from the Harriman Alaska Expedition. XXVIII. Hymenoptera. Proceedings of the Washington Academy of Sciences 4: 117-274.