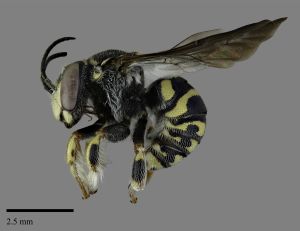 Based on distinct differences in the cytochrome c oxidase I (COI) gene that resulted in two distinct Barcode Index Numbers (BINs) (see Sheffield et al. 2017), Sheffield and Heron (2018) agreed with Urban (2001) and considered A. robertsoni a separate species from the eastern A. notatum (Latreille).

The DNA Barcode Index Number (BIN) for this species is BOLD:AAE5295.

The nesting biology of A. robertsoni was reported from British Columbia by Leech (1947). The nest was a single cell constructed on the flat underside of a piece of wood (Douglas fir), and was 13 mm long with an apical spike, appeared somewhat warty, and was greenish black with a vitreous surface.