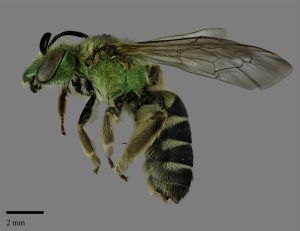 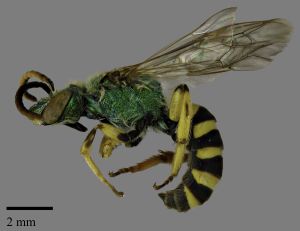 Cresson (1887), and later Robertson (1895, 1897), Crawford (1901), and Vachal (1903) applied the name Agapostemon viridulus (F.) to specimens of A. virescens based on the descriptions and/or the geography indicated, as A. virescens is the only species occuring in eastern North America, and all of Canada in which the female has a black abdomen (Sandhouse 1936). Robertson argued that... it is an absurd affection of authority to give this name [A. viridulus] to the Cuban species, before it is shown that Fabricius did not mean that his species came from the continent of North America, that he did not know where it came from, or that the description of Apis viridula does not apply to the North American species (Robertson 1897). Robertson (1897) also indicated that Provancher (1882) misidentifed A. viridulus (=A. virescens) as Agocholora radiata, though in that same work (Provancher 1882) he recognized A. virescens as A. tricolor Lepell.; the misidentification was suspected by Sandhouse (1936) and confirmed by Sheffield and Perron (2014). Crawford (1912) also used A. viridulus for this species for specimens from Medicine Hat, Alberta as the name A. virescens is not applied in his revision of North American species (Crawford 1901), though again the morphology and geography fit this species.

Unfortunately, Fabricius (1793) did not idicate a type locatity, but in 1804 indicated that the species was from Habitat in America boreali (Fabricius 1804), hence the comments from Robertson (1897). The lectotype for A. viridulus (F.) was designated by Moure (1960) from two female specimens at the Lund collection at the Zoologiske Museum in Copenhagen; Moure (1960) indicated that the species was apparently limited to Cuba, though offered no diagnosis to separate this material from A. virescens. Roberts (1972) accepted the treatment of Moure (1960), but indicated that due to the inadequacy of the original description, many authors believe that A. viridulus is a synonymy of A. virescens. If this proves to be the case, than A. femoralis Guérin-Méneville, with a type locailty of Cuba) would be the oldest name available for the Cuban species. The phylogeny of Janjic and Packer (2003) placed the Cuban species in a separate species group (viridulus group) from A. virescens (splendens group), the former species group seemingly restricted to the Caribbean; however, no morphological comparisons were made to distinguish the species groups.

The DNA Barcode Index Number (BIN) for this species is BOLD:AAB2708.